On Friday 13th November, in a ceremony led by the German Ambassador, Dr Peter Ammon, Tim Illston was installed as Honorary German Consul for Bristol.  The ceremony was held in Bristol at the offices of the law firm Burges Salmon, where Tim is a partner.  Dr Ammon thanked the outgoing Consul, Ann Newby, for her work over many years and welcomed Tim Illston to his new role.  Tim, a member of Bristol-Hannover Council committee, responded with a comprehensive account of the firms, German and British, who were already doing business and others who were in a good position to do so.  Tim hopes to support trade links, university connections and generally raise the profile of Germany in the South-West. 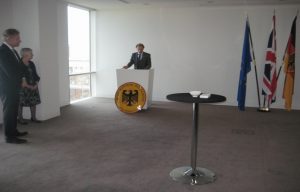 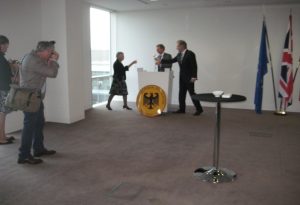